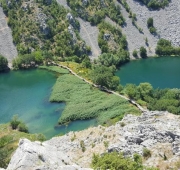 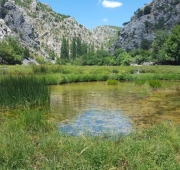 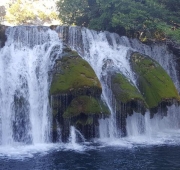 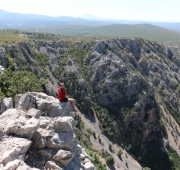 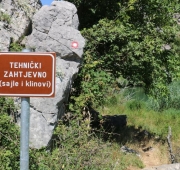 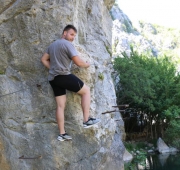 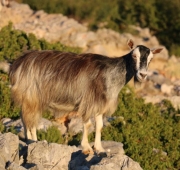 Canyon of the Krupa River is one of the most beautiful things I have seen and experienced lately. Even though I am a person who travels a lot every year, and I have already seen a lot of natural beauties, the canyon of Krupa River got me feeling excited. You could say that I looked like a little kid when you give him a toy he wanted for a very long time.

Canyon of the Krupa River is located in the Zadar hinterland. Exactly 20 kilometers from Obrovac.

The Krupa river is a very short river that measures only 7 kilometers in length. The Krupa River boasts beautiful canyon and nineteen waterfalls.

The starting point for a one-hour hike through the canyon of the Krupa River is at coordinates 44.193730, 15.844029. There is only one very old house, in which an older Serbian family lives. You are probably wondering why Serbian? Many Serbs had been living in this area during the pre-war period. Mister and his wife are always so friendly and invited me for coffee every time. They never expect something in return. Their household has more than 50 goats, which is also very interesting.

You can leave your car at the specified coordinates and take one hour hike to the bottom of the canyon. Right at that part of the canyon is a bridge made of stone which is over a hundred years old. The legend says that the bridge was built by a boy who was in love with a girl who lived in a village which was on the other side of the Krupa River.

While descending the canyon, you will be able to see and admire how beautiful this immense beauty of nature is. All the way through the canyon, you can find many interesting vantage ponts from where you can take beautiful photos.

Right behind the end of the bridge, the Krupa River made a large pool, where you can easily swim up to three or four (it depends on the amount of water in it), slightly smaller, but interesting waterfalls as well. Right behind the stone bridge is a slightly larger waterfall that is worth seeing.

There are many fig trees at the canyon, and no one will be mad at you if you eat them. I do not know the exact time when the fig ripens. I think twice per year.

You can return from a hike on another route. It is like a shortcut, but it is a bit more challenging than the first route. Because you have one section which is about 20 meters long, and it is full of wedges and steel ropes. You can try to go through it if you used to do something similar, but I guess it is not a case. You can try it if you want, you will not lose much time if you do, because the section is at the beginning of the path. If you find it too difficult, you can just go back to the same path you took before.

As I mentioned earlier, I have been to canyon of the Krupa River six times already. The last time I came to visitI it was at the beginning of June with my friend Alex, who is also a video recording expert.

Because Alex and I are a sort of people who like to explore, we decided to spend a whole day to explore the canyon.

The first thing we did when we arrived at canyon of the Krupa River was swimming in the pol, climbing waterfalls, jumping in the water… Long story short, we explored and did the filming and photographing at the same time.

When we were done exploring around the stone bridge, we decided to head down the left bank of the Krupa River. Everything was fine at first, but then the path became more and more impassable. At the other side of the river, everything seemed so much better,  so we decided to cross the river, despite the fact that we had a lot of photo and video equipment.

We had to find a place where the river is not deep, otherwise, we could wet our cameras. Cameras should not be wet. We found a waterfall that showed us that water is not deep there and that we could cross it without worries. At first, I waded through a dense thicket, but after that, I crossed without any difficulties. In the end, we had a problem which was much greater than the rest of all the things that happened to us. The right bank of the river was completely overgrown with shrubs and it seemed to be impossible to get through it. I went straight a bit and I found a passage where it was easier to pass, but another problem was that in front of me was a couple of feet long and wide living mud. There was no choice but to step into it. It was so risky, but it worked! The most unpleasant feeling of all was that you did not know what was in that mud, but you had to walk through it anyway.

When I managed to get across, I called Alex and gave him instructions on where to go. Even today I remember the expression of fear and surprise on his face when he saw the living mud in front of him. I think I will never forget that.

Since there was a well-groomed path of the stream, we decided to head forward along the Krupa River. Our final destination was a point where Krupa River flows in Zrmanja River.

At some point of the path we walked, canyon suddenly widened and meadows appeared in which herd of cows grazed grass. Then canyon became very narrow like it was before meadows. I did not get it. How were the cows brought to those meadows?

Since the day was already turning into night, and our destination (the confluence of Krupa and Zrmanja ), was not in our sights, we decided to go back slowly towards our car. As I studied google maps later at home, I found out that we lost our way when we turned right from the path we walked at. Now I have one more reason to go back to this beautiful place for the seventh time.

While we were coming back, we did not expect that we will see anything special that we have not seen before. We were wrong. In front of us, a waterfall showed up with beautiful shape and colors. At the moment I saw it I had a desire just to jump into the water and swim in the waterfall. Because the flow was strong it was not easy to swim in it, but when you want something so badly nothing seems hard. Because everything looked so beautiful, I swum back to the shore to take GoPro, then I came back and filmed waterfall from the inside. You can see that video below.

We continued our way back along the Krupa Rriver. Suddenly, some wall appeared in front of us. I climbed on it a bit and from the high, I saw everything so clearly. I realized that we lost our way again and missed the right path somehow. I asked Alex if he wants to climb the wall or to go back. Somehow I convinced him that it would be better if he climbs the wall. Because that way can lead us to the car much faster.

There was a herd of cute goats waiting for us near the car. A bit later, Mister and his wife who I mentioned before, invited us for coffee. Because it was already half-past ten, we, unfortunately, declined the invitation. Instead, we had a little chat, which was interesting though.

This experience left a big impression on me. I already worked out a plan in my head when to come back again to visit this beautiful Canyon of Krupa River, and next time I will explore it all the way for sure! I will probably head out to Canyon of Krupa River again in September. The fig tree will rip then. There is nothing better than eating a fig from a tree that you picked up on your own hand.

I am looking forward to visit Canyon of Krupa River again, as I used to look forward to Fridays when I went to parties. 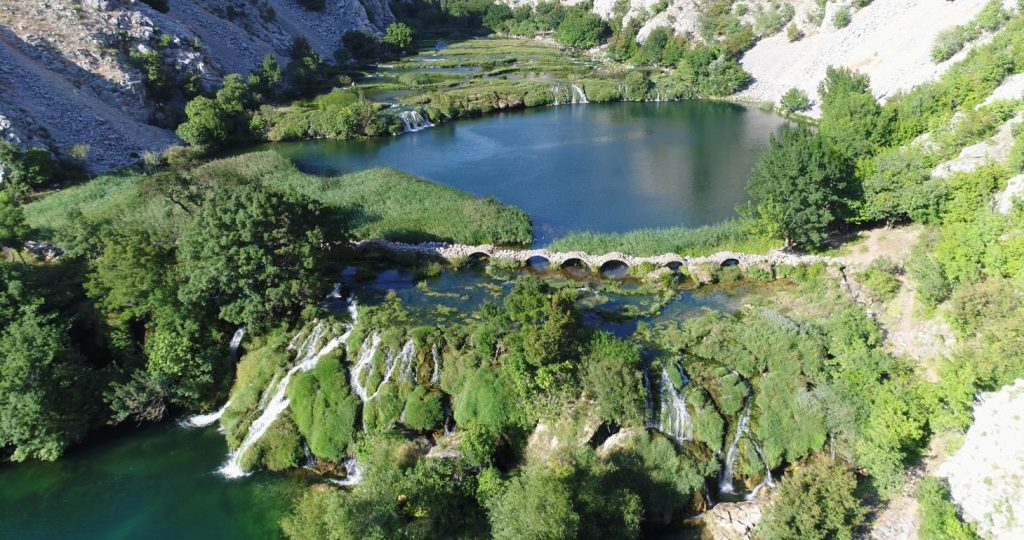